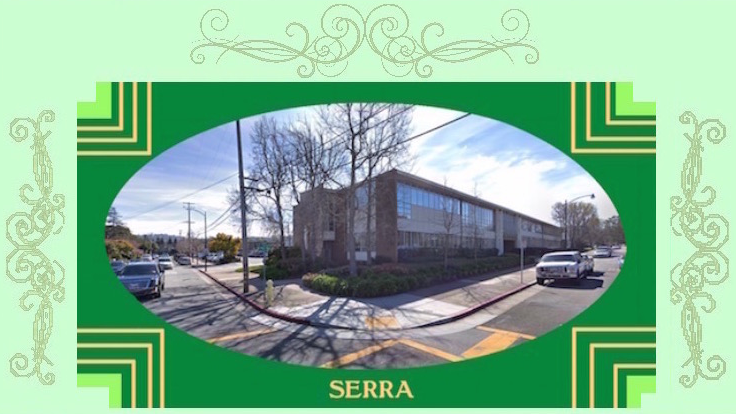 
The site was named Private Reflections because it is indeed intended to be private, just for YOU. That is what this is. Like the expression "For your eyes only" on documents, this entire site is intended to be seen by no one but YOU. That is true, and I intend that as an absolute. Since creating this website I have told no one of its existence other than you, and I intend to keep it that way. This site has in truth been made from scratch just for YOU, period.


Above is a photo of Serra High School. I should probably claim my "alma mater" to be the Hillsdale Mall. 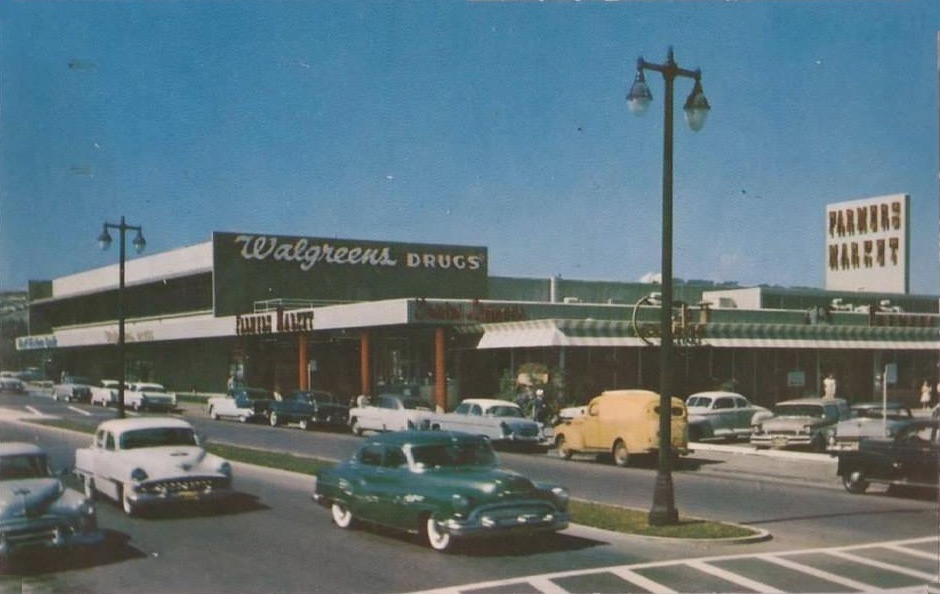 I did go to high school in San Mateo. But as a kid with "social attitude issues" I did not so much "relate" to my school as much as I related to my "tribe," my "crowd," San Mateo kids "beyond" (in the sense of "surpassing") what "school identity" provides. 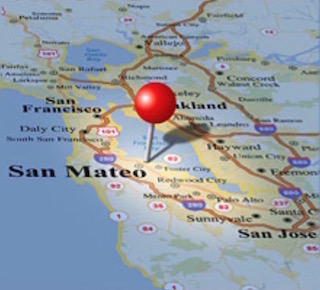 I identified myself more as a "San Matean," because my friends were from every corner of San Mateo, from San Mateo High School, from Serra, from Aragon, from Hillsdale High, and so forth. 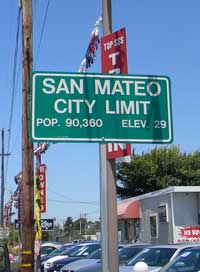 One of our cultural "hubs" (where we met up regularly and hob-nobbed) was Central Park. 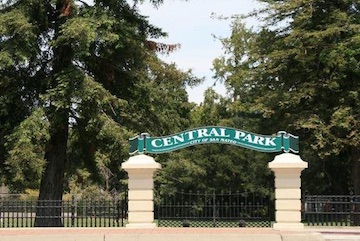 We didn't really make distinctions between someone being from San Mateo High or Serra or Hillsdale or what have you. But there definitely was a consciousness that we were "San Mateo people." I mean, it was quite clearly "different" if people appeared among us who were from say Palo Alto or San Bruno. But we didn't feel that if they were from San Mateo. I'm laboring to say merely that there really was a consciousness on some level that we were "San Mateo people." I heard people through the years take notice of it without really knowing it, in phraseology such as, "until I met the San Mateo crowd" or things similar. I've "picked up on" the fact that people sensed the San Mateo people to actually be a "sort" or to have something about them. I believed it, but it always interested me to detect it in other people's conversations. 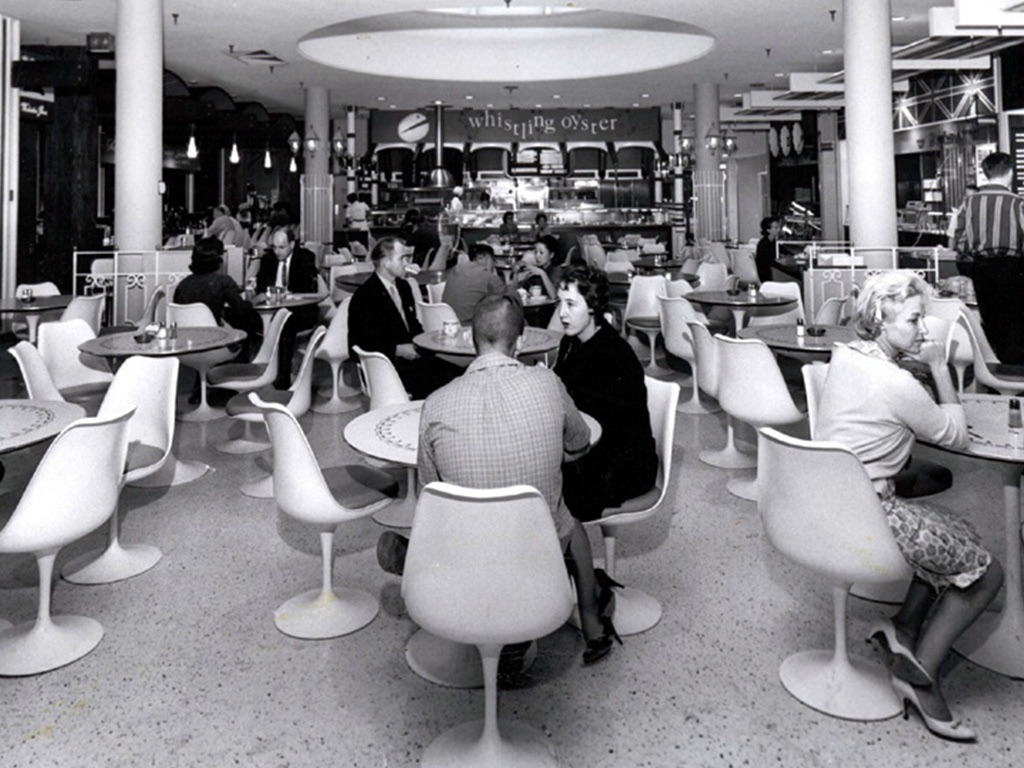 Farmers Market in the Hillsdale Mall.

By the way: Study the above picture. In about 1968-1970 very frequently every table in that picture (except for maybe the three or so farthest away, by the Oyster place, were packed with San Mateo teenagers of the "partying" variety. And I do I mean packed. Sometimes there weren't enough chairs, so there was standing around all through there, and girls sitting on their boyfriends' laps, and occasionally even three or four kids sitting on the floor. And kids were coming in to this spot and going out, non-stop. It was a major hangout. Directly west of Farmers Market on 31st Avenue (which was also the route to the Mall from Hillsdale High School) there was a small residential neighborhood park nicknamed "Hidden Park" where the "partying" crowd also hung out and did the stuff they did in those days, and so there was this regular recycling of kids to and fro between Hidden Park and Farmers Market. Between those two "spots" you could find and interact with, network with, pretty much the goings on in the whole town. Today people use "social media." Back then it was live and in person. It still amazes me how much young people back then "got around." There was "motion." Funny, it was even in songs: Way earlier, the Beach Boys sang, "I get around," and up in the sixties the Scott McKenzie song San Francisco ("be sure to wear some flowers in your hair") highlighted this feeling of "motion": "such a strange vibration - people in motion - there's a whole generation - with a new explanation - people in motion - people in motion," etc. To me, that was a "characteristic" of the young of that generation, the feeling of being in motion. It's one of the things (i.e. hitch-hiking) that evaporated during the 1970s. And so, kids came "by hook or by crook" from all points of the compass to any place where the "action" was (or what, back in the '50s' might have been called the "scene." Farmer's Market in the Mall was a "hub." 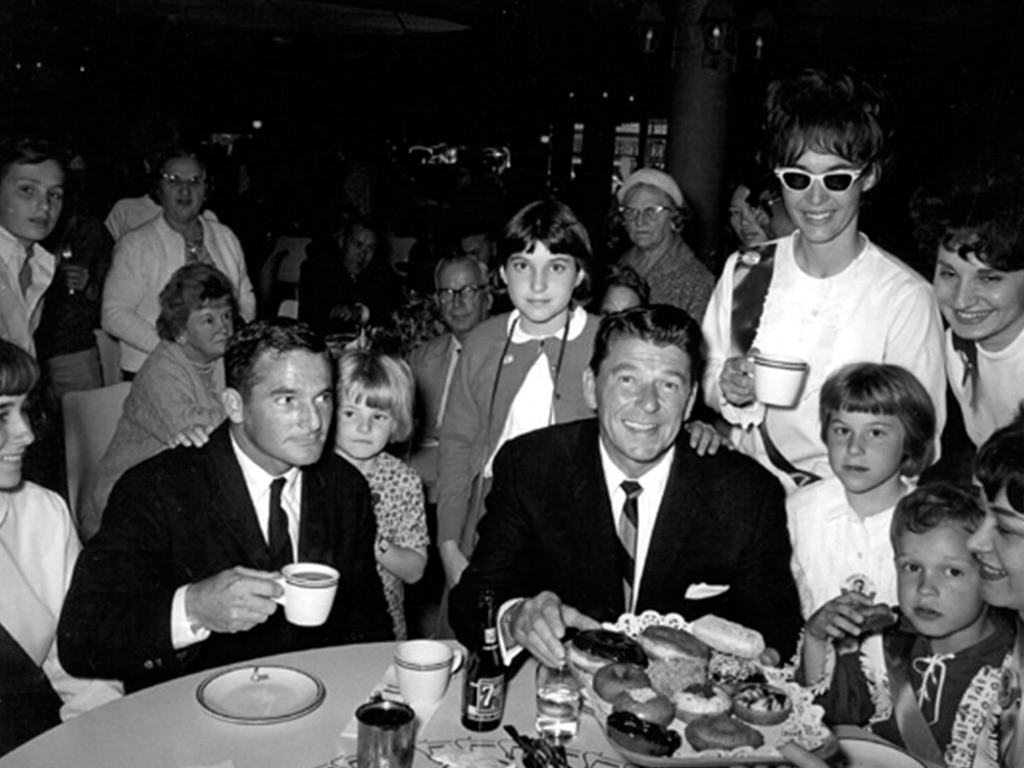 You have said a number of times that you were born in San Mateo. In that respect you may be more of a "San Matean" than I am, because I was born elsewhere in California. So it were a lost cause if I sought to "compete" as to who is "more" of a San Matean. As I do not not qualify by birth, I must concede to others the title of best San Matean. It was my grandparents who were in San Mateo before me. In the days of my childhood my parents (from across the San Mateo Bridge (in Hayward) were making regular pilgrimages to my grandparents' home in San Mateo (for family visits and stays). And then I (in my childhood) was visiting my grandparents in San Mateo, and staying there for whole vacations (summer vacations et al). I ended up forging childhood friendships with other kids there in San Mateo, and began thinking of San Mateo as "my" home town, or where I definitely wanted to be. My parents found themselves with a kid constantly begging to be allowed to "go live in San Mateo with my grandparents." My reasons were many: I wanted to live with my grandparents, rather than with my parents. Hard to explain. I felt a greater connection with them. And the childhood friendships I had forged in San Mateo were deeper than those I had across the bay. Finally there came the clencher: I spent a whole summer vacation in San Mateo and summer vacation was ending, and my parents were not ready yet to conclude their own vacation and so receive me back home. At the start of the school year my grandparents were obliged to enroll me in school in San Mateo. So I started school there. I instantly made more friends and bonded, and loved my life in San Mateo. So when my parents returned and brought me home I was miserable. I begged to be returned to San Mateo. It was fortuitous for me that my parents were overwhelmed with life difficulties at that time (including navigating a move to a new town), and so they caved and let me return to my grandparents in San Mateo, permanently. God is my witness that with every fibre of my being, I felt that this was permission to go back "home." That is how I felt about San Mateo. I rushed back into the arms of my grandparents, and I ran back to my San Mateo friends, exulting, celebrating, that I was "back home" for good. 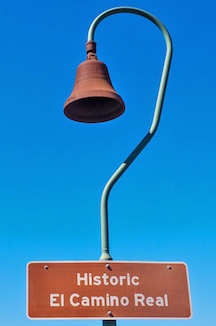 Deliberately in honor of the main drag that ran through San Mateo, El Camino Real, I bought a brand new Chevy El Camino. It's true. I mean I had a "thing" about the "highway" "El Camino Real." And I really did choose that Chevy El Camino because it was called that. Sure, it was definitely a plus that it was a Chevy with a 350 engine and so forth, and a great car. But it was that name that first attracted me. The "thing" that I had about the highway, El Camino Real, had gotten into me in my childhood. My family took me to see the California Missions up and down California. One of them in particular made a big impact on me, and contributed the taste for history and things historical that is still a very big part of me. But the point here is that I very early on knew about Padre Serra and the California Missions and the history behind the "road" we call "El Camino Real." Can't put it to words, or at least not just here and now, but to me, "El Camino Real" (the road) held a certain significance. 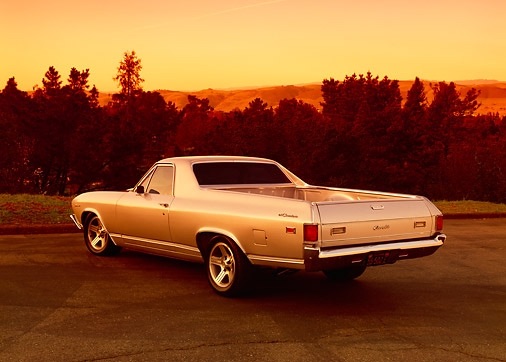 When the developer David Bohannon built the Hillsdale Shopping Center he made a quite a big deal (in advertising, promotionals, photo ops, news reports, et al) of it being the geographical HEART of the Peninsula. 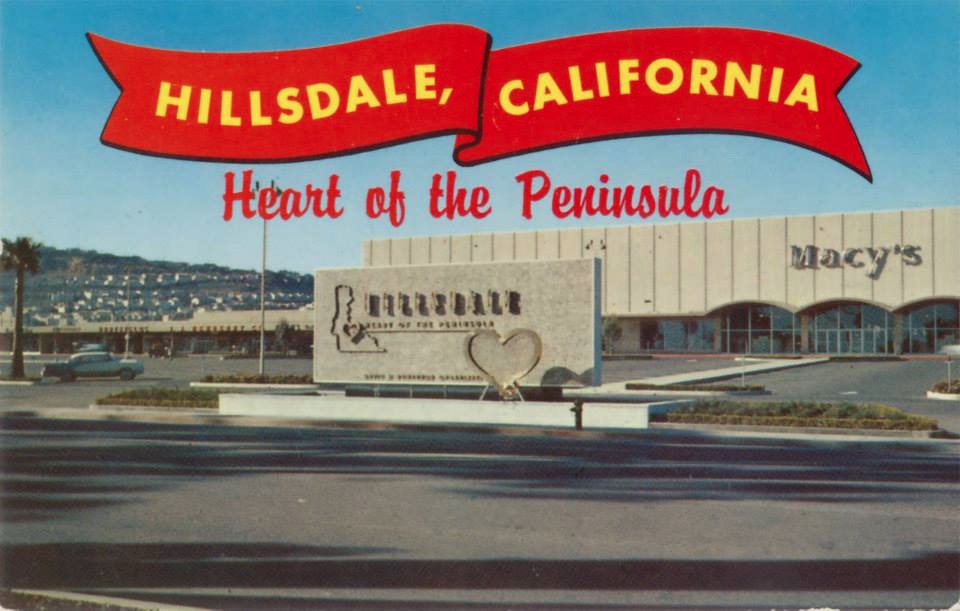 As a kid I was quite struck by that myself, although today I don't know why it grabbed me as it did. It is possible that my grandfather pointed it out to me on one of the tours he gave me when I first came there. But it did grab me. I really thought that was something. Even in later years (like the 1970s) I made deliberate (on purpose) trips (with a camera) to the big shiny HEART sign there (which is right on El Camino by the way), and asked to have my picture taken with it. It was kind of stuck in my mind that I was standing at some kind of cosmic center of something. Here is not the place to explain it, but later in life I did come to learn what "that kind of thinking" is, and I must confess, I have not entirely ceased from thinking that way. But that's for elsewhere.


I'm sure you've heard of cases where someone's boss or their job or their career, etc., make them relocate to another city. Later in life something along those lines happened to me: I was forced to move from San Mateo to elsewhere in California. I hated the move. I have ever since looked back to San Mateo with nostalgia, or perhaps I could say sorrow for the loss. This may give you a glimpse somewhat into my hometown patriotism: Before moving away from San Mateo I got a trowel and a metal chest, and I drove to points north, south, east, west and center, all inside San Mateo city limits, and with my trowel I dug up and took soil. I took a bit from the Hillsdale Mall, some from San Mateo High School, yes, some from Serra, some from Hillsdale High, etc., some from Central Park, and so forth. I considered it my "native soil." It's rather a sentiment of "loyalty." In the metal chest I mixed it all together. So I had "San Mateo soil" with me. In a couple of places where I've subsequently lived, I have sprinkled San Mateo soil, to make myself feel a bit more "at home." Men have said "you can't take it with you," but I have certainly tried. Now I have only a few ounces of it left in a small container.


"There's a feeling I get when I look to the west":


I have kin still on the Peninsula, and so, for that and other reasons occasionally I find myself driving there. I often approach from the east, that is, travelling west. Perhaps you are familiar with the haunting strains of the Led Zeppelin song Stairway to Heaven that go "There's a feeling I get when I look to the west." It goes through my mind all the time, whenever I find myself east of San Mateo and looking west toward it, or driving toward it. Feels like I'm heading home, but circumstances simply won't let me "stay" there.